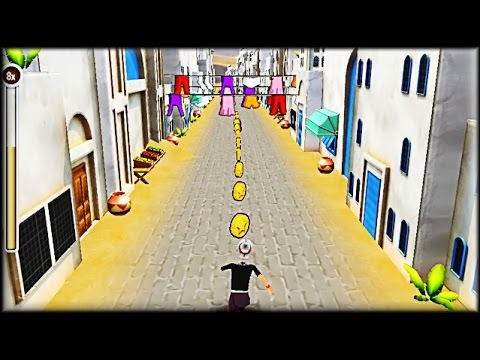 No, Angry Gran Run: Cairo is not about a little old lady running about among the pyramids. Though certainly, that would make for a pretty awesome, if a bit silly, game. Instead, the game has you controlling aforementioned little old lady as she runs down the streets of a typical Thousand and One Nights type town which looks absolutely nothing like Egypt. Well, perhaps a Disney-fied Cairo, but that’s besides the point. Also, why an angry granny? We shall perhaps never know.

The game plays rather similarly to related games on a bunch of smart phones. You take control of a single runner, and you use that runner to collect stuff while avoiding obstacles. Those obstacles are pretty much every single stereotype and cliche you can think of when it comes to the Egypt. Granted, anyone actually from the area, much less Cairo, would probably not really recognize any of them as anything other than cartoonish depictions out of a fairy-tale story, but hey, they do the job more or less.

Questionable choice of characters aside, the graphics are fairly well prsented. They’re done in fairly nice 3D, and everything animates nicely. Just about everything has some small animation that fits in nicely with the rest of the game. There’s a great deal going on at any one time on the screen, making for a vibrant and very colorful experience.

The audio is fairly catchy, though it’s something that would seem to be more at home with Bollywood than with Cairo (same could be said about the architectural style, but hey, it’s just a game). Still, it works well with the game and provides a nice beat and rhythm to play the game by. You’ve also got some pretty nice sound effects, as there’s one with each action your granny takes and each obstacle she interacts with.

The obstacles pretty much fall into just a few categories: jumps, slides, and turns. For jumps, you have to… well, jump. Obstacles that require jumping could be pits, giant cobras, guys on flying carpets, or guys carrying palanquins. Regional authenticity aside, all those obstacles, as aforementioned, look pretty great in the game. Slides require your amazingly athletic granny to slide across the gravel and under whatever obstacle presents itself. Turns require you to turn just right before slamming into a wall. Throughout all of these, you can can move left and right. You need to do this in order to pick up coins and hit baddies (which will give you coins). Getting these coins allows you to unlock different costumes which have different powers. Like the Dino Gran which can cause Coin Multiplier powerups to appear more often or Captain Cuddles who makes all powerups appear more often.

All in all, Angry Gran Run: Cairo is a fun little game. It’ll start you out on a nice slow curve, and then eventually ramp up the speed and difficulty as you go along. Obstacles and bonuses will be closer together requiring fast reflexes and quick thinking. So go on and give it a shot!