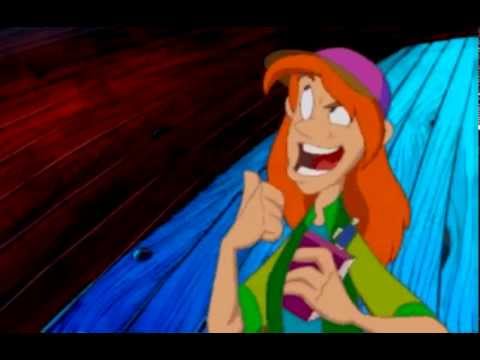 Brain Dead 13 is a pretty fantastic 90s homage to the 80s Laserdisc classics like Dragon’s Lair and Space Ace. It might not be the work of Don Bluth and co., but it’s a pretty fantastic effort. It’s colorful, extremely well animated, loaded with hilarious and violent humor, and easily exceeds the standard Saturday morning cartoon in its production values.

When I say violent, though, I mean violent. As in, a Teen rating would have been pretty unlikely back in the day if the review board actually saw all of the content in the game. A true credit to those moral crusaders, though – this title received the K-A rating. You can take a look for yourself, a compilation of all of the death animations begins after the closing credits.

The main game, without any deaths, played through the debug menu’s demonstration mode, runs from the beginning through the end credits. I did record the entire thing playing without the debug mode, but the key-press sound effects got a bit grating, so I rerecorded it with the computer playing, leaving these sound effects out.

The collection of animated death scenes begins at 34:38 and runs through the end of the video. Continuing the trend in many of the games I’ve uploaded this month, I chose this one because of how appropriate it seemed with Halloween being the day after tomorrow. I loved this game as a kid – my dad bought me a copy at a used games shop in Stanmore (London) when I was in the 7th grade and I played it to death. Does anyone else remember the box that it came in? That stupid yellow pillar shaped one that kind of resembled the Jenga packaging? I hated that box. It wouldn’t sit nicely on the shelf next to all of my other big box PC games. Just like the Gabriel Knight CD edition, with it’s retarded LSD inspired pointy stuck-together-triangles shaped box. Between them, I really grew to resent the mess they turned any space they occupied into. I’m not sure why, but I’ve never been able to let that one go – who the hell thought a giant yellow box shaped like a Saltines carton was a good idea?

If you’d like to see an alternative version, I also have the Sega Saturn version on display here:
_________
NintendoComplete ( punches you in the face with in-depth reviews, screenshot archives, and music from classic 8-bit NES games!

Visit for the latest updates!