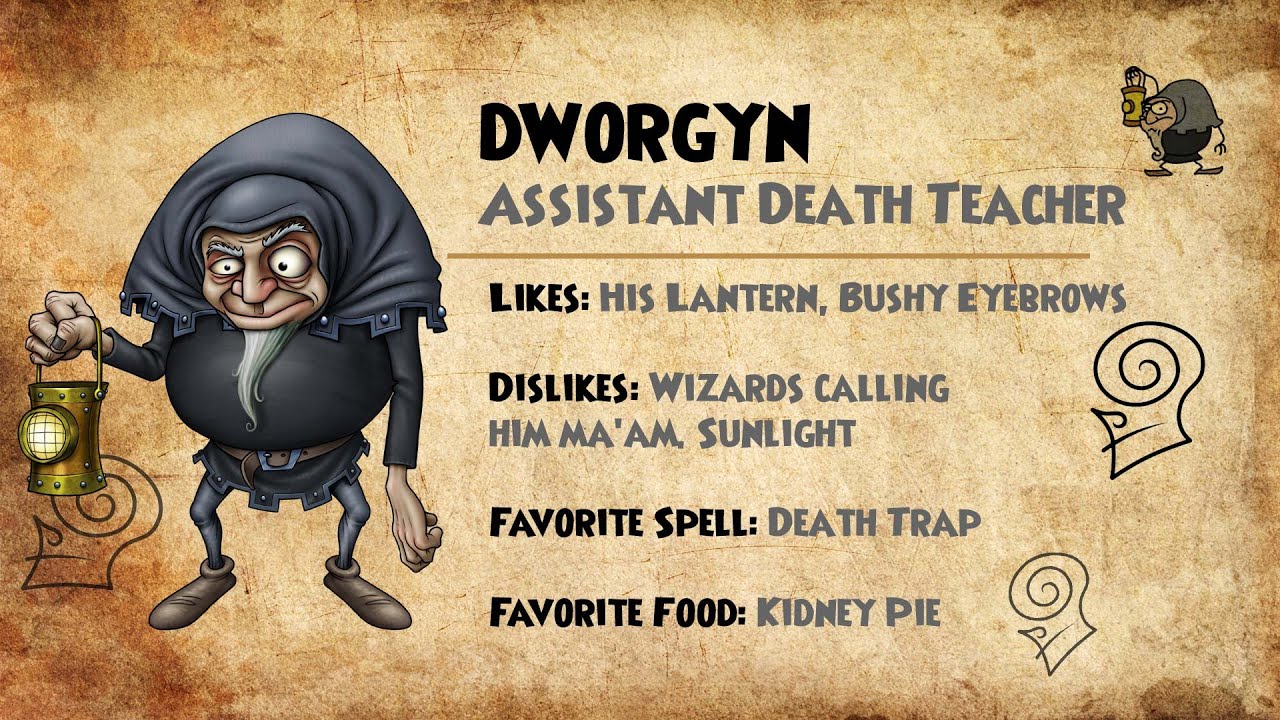 It was a dark and stormy night in Darkmoor, when, in the laboratory of the infamous Dr. Finkelstein, Dworgyn was born to Finkelstein’s trusty Lab Assistant. Assisting Darkmoor’s “eccentric” scientists was a long-running tradition in the family, and Dworgyn was groomed to follow his father into service. But late at night, when lights were low, Dworgyn was secretly reading comic books! He idolized the fictional Necromancer Jamie Skinner and had a complete collection of his comics… until his father tossed them into the Darkmere Abyss.

Dworgyn had failed his exams – the boy couldn’t tell a beaker from a test tube! In disgust, Dworgyn’s father determined his son would become a Valet, and soon learned of an open position in service to a Necromancer in Wizard City.

Life for in Wizard City was brighter for Dworgyn, but no less frustrating. His new boss, Malistaire Drake, found him to be an utter nincompoop, and reminded him of this fact daily, when Dworgyn misplaced or destroyed another of Malistaire’s treasured black robes.

Then one day, as Malistaire tried for the umpteenth time to teach a student a simple Infection charm, he exclaimed that he “would have better luck teaching his oaf of a valet.” In a rare fit of humor, Malistaire did just that. What he did not expect, however, was how naturally and skillfully Dworgyn executed the charm.

Later, at home, Malistaire’s wife, Sylvia, chuckled at her husband’s surprise. She pointed out that Dworgyn might actually make a talented wizard. And thus it was that Dworgyn found himself being instructed in Necromancy by Malistaire himself. He mastered his lessons with ease, but then, nearly four years after Dworgyn’s first charm spell, Sylvia Drake fell ill and died. Malistaire disappeared mysteriously without leaving a single word for Dworgyn.

Feeling like a failure, Dworgyn returned to Darkmoor and began serving his Ant Aunts in Dimwood Vale. He despaired of ever finding happiness. Still, a glimmer of a hope led Dworgyn to secretly apply for the position Malistaire had vacated, and that hope was realized when one fateful night. a young Wizard invited him back to Wizard City! After assisting the wizard in a duel with the mysterious Ostrame, Dworgyn was awarded the position of Assistant Death Professor.

Happily teaching his student in the murky shadows of Night Side, Dworgyn finally found his place.